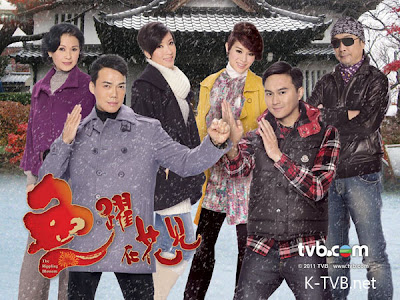 HIU and YING are remarkable Japanese cuisine chefs whose main aim in life is to pursue excellence in chefhood. Although HIU and YING have different mothers, they get along very well.

When their father’s first wife, LANG YUNG-YUNG (Angelina Lo) creates trouble for the restaurant, HIU declares to challenge her, claiming whoever wins will have the restaurant.

YUNG sends her personal nurse, CHOI SZE-LUNG (Tavia Yeung) to get close to HIU. He is completely smitten by love for her but soon becomes unhappy with their lukewarm relationship.

On the other hand, their supply for fresh food has been shut out. YING has to make a trip to Hokkaido, Japan to buy fish. He meets KEUNG KEUNG (Myolie Wu), a willful girl from a wealthy family on the plane. They also meet MOYUNG CHING (Damian Lau) who is known as “The God of Fish” by chance in the fish market.

As the relationship between YING and KEUNG KEUNG grows, KEUNG KEUNG finds out that MOYUNG CHING is her long lost father. MOYUNG CHING becomes YING’s mentor and helps him through the competition to win the first overseas Japanese restaurant franchise in Hong Kong. As YING’s career grows, HIU becomes more jealous of his brother and starts to scheme with CHOI SZ-UNG to get his father’s fortunes.

As HIU and YING meet with setbacks in their career, family and their loved ones after their attempt to save the restaurant, the two brothers decide to have a competition

Another work of Tavia. Modern drama which I think she fare reasonably ok, though I prefer her historical dramas better. Much Much better than the previous drama, Cupid Stupid, also starring her and Michael. What Probably makes me finish it, is the Appetizing sushi featured. Craving for them. Though most of the time, it seemed that the sushi is just those rice with topping type. It will be nice if they featured those handroll sushi. In a way, this drama gives sushi its limelight, and I can consider this as an improvement to normal HK drama. Though food involved drama like Moonlight Resonance, there’s the mooncake thingy, but no real knowledge about mooncake making. Plot wise is still ok, not those very  romantic kind, with habitual revenge (just a little). Generally a happy drama, with happy ending. It’s pretty lightweighted drama, doesn’t triggers any heart wrenching moments to me, yet it’s satisfactory to watch. Watch it while you are having a meal, or snacking. It really makes you hungry. Acting wise not much of difficulty in their roles I guess. Michael Tse acting of a bad guy can be really REAL, given his role of Laughing Gor in a cop drama previously, while Tavia bad person role is seen in Beyond the realm of Conscience. So this time round, I think it’s pretty effortless for them to portray their character as I think it only takes them 30% of their previous baddie roles.  Myolie role is also managable. She has better roles in other dramas. So is Julian’s. Given the cast experience in acting, this storyline and characters is honestly not much of challenge to them, except for the technical stuffs, like cutting, conversation about sushi.

Rating is actually hovering between 3.5-4, but no harm rounding up to 4.